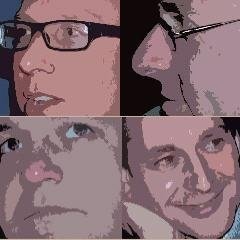 How The River Runs...

London band The Original Beekeepers are primarily Tom, Steve and Ash and have been around since 1984 in one form or another, originally performing as Shammy Leather. With a huge mountain of various CDs they have stockpiled nearly 500 home recordings. They have appeared on a couple of Asaurus Records compilations and "Music For Barges" originally came out on the UK cassette-only label Victory Garden Records. Eccentric and off-kilter their releases are never particularly easy to find, but are well worth the effort. They also perform live occasionally