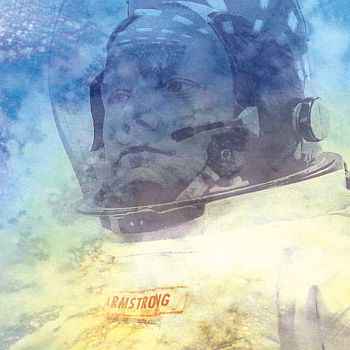 The excellent favour and success of "The City Without Sun" by Massimo Ruberti from Livorno (Italy) give us the perfect sense of his ability to create great soundtracks concerning the human soul, far from clear consciousness, catatonic enough ..lost in fact a sweet inertia with a total absence of movement initiative. Sounds and rhythms that color the essence. Today Ruberti scours to basically anything that takes the human being to follow the stars in perpetual search and desire to have more awareness of what we really are, and it does so in its own way, taking the astronaut Neil Armstrong as a historical figure and example of the first who was able to set foot on the Moon to begin to reveal something more about us..to make real those things that were science fiction or better predictions of writers (almost prophets and surrealists) as J.G. Ballard to name one. The album Armstrong is a smart and well-kept collection of six soundtrack that tells the steps of the journey of Apollo 11..each track is a preliminary step and / or the previous one and will reveal absolutely inseparable just like a real and its concept album. Certainty is that we are faced with another spectacular and extremely successful album that gives us hope that we can once again have artists of this excellent skill in Nostress.

"Atavic dreams human travel cosmic lead to understand more precisely how he manages to set to music that way.

After telling about the city without sun, when the smog clears, at night, look back to look for angles of night skies; looking for stars and planets where the mind can project itself, where it can still transcend.

How not to think, looking back at the moon, and having in mind travel sidereal, the controversial enterprise of Apollo 11, Neil Armstrong and his companions, to their long journey to the satellite and back, and especially to their inner journey, the conquest their 'inner space' of Ballard memory?

'Armstrong' is this, a journey in six acts, six soundtracks for lost, static music for travelers."
Massimo Ruberti