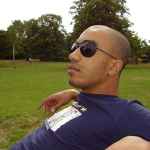 Born in 1983, this musician based in Madrid has always been motivated by music, working in diferent styles like hip-hop, house, idm, minimal or techno.
Notably his address at former Guiedi Prime contemporary arts project. Focus on the dissemination of modern arts into an international panorama, like his performances in different venues around the world. In addition, he is producing music for labels as Esperanza or Del Barrio Records.
He also is starting a new minimalist ambiental dub project called Ausdrücke with his friend and colleage Galman. Please, visit myspace.com/ausdrucke for further info. He takes part in a minimal techno band named Happy 3 Friends, working together with his friends Galman and Tony Donatto.
Gale Talk live set is one of his most important ways to share what is inside his mind when performing, he says. We can find different atmospheres at all times in his eclectic and full of surprises live set. Coming to a thrilling acoustic symbiosis between the musician and the crowd.